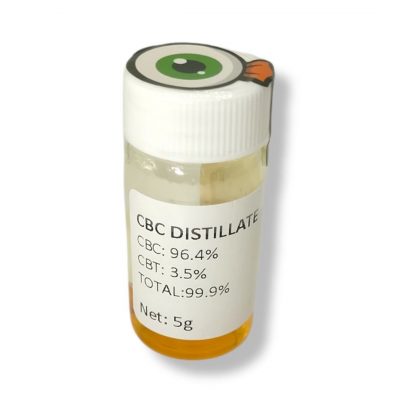 THC and CBD are the best-known compounds found in cannabis, but they’re only a small portion of the identified substances. While there are hundreds of cannabinoids in cannabis, cannabichromene (CBC) is among the most researched cannabinoids.  Like other cannabinoids, CBC has unique actions in the body and may be beneficial for a number of ailments.  OilWell Cannabis Dispensary of Houston, Texas has a great deal of experience in CBC and would be happy to share our creations and experience with you!

CBC may not be as widely known as other cannabinoids, but it’s been recognized since 1966. It’s a naturally occurring phytocannabinoid that’s non-psychoactive, like CBD. It’s also the second-most prominent cannabinoid found in cannabis.

Though it can make up the majority of a cannabis plant’s profile, modern plants are bred and cultivated to produce high THC content, leaving few with a high concentration of CBC.

As far as its mechanism, CBC has commonalities with THC and CBD and is produced through a conversion of cannabigerol (CBG) and cannabigerolic acid (CBGA). The result is CBCA, which is then decarboxylated into CBC.

Though it has no “high” like THC, CBC can be mood altering. Some users report a feeling of relaxation or happiness.

How Does CBC Work?

The endocannabinoid system is a complex cell-signaling system that was first investigated to determine the mechanism of THC. Research into its functions is ongoing, but we know that it impacts a wide variety of functions in the body, including sleep, mood, memory, appetite, and reproduction. It’s completely independent of cannabis – the compounds in cannabis just act upon it.

The two main endocannabinoid receptors are:

Endocannabinoids and cannabinoids can act on either receptor to produce different effects.

The two enzymes in the endocannabinoid system are:

At OilWell CBD, we stay ahead of the curve with as many legal cannabinoids and their applications as possible. Our broad-spectrum CBD products have complete cannabinoid profiles, including CBC and other synergistic compounds, to address your needs.

Like CBD, CBC may be a valuable therapy for alleviating the effects of cancer. In animal studies, the various cannabinoids were isolated to see the effects on inflammation and carcinogenesis, or the formation of cancer. CBC was found to interact with natural endocannabinoids to inhibit tumor growth.

CBD and CBC are the two non-psychoactive cannabinoids and known to modulate the pain perception, which could prove valuable in treating chronic pain. In animal studies, CBD and CBC were used together to stimulate the body’s response to painful stimuli and produce a pain-relieving effect.

Essentially, these cannabinoids blocked the pain response and activated the body to produce pain relieving-effects, showing that they may be useful as therapy for chronic pain conditions.

Neurodegenerative diseases like Alzheimer’s, Parkinson’s, and Huntington’s are progressive and devastating. Research has been done into the benefits of cannabis, and particularly THC, for its neuroprotective properties as a potential therapy for neurodegenerative conditions.

Other non-psychoactive compounds may have clinical potential, including CBC. In studies, CBC was found to have a positive effect on the neural stem progenitor cells, which are an essential component of cognitive health. One of the cells that neural stem progenitor cells transition into is astroglial cells, which are important for homeostasis in the brain and defending against oxidative stress that can lead to neurological conditions.

Based on this study, CBC may be beneficial for improving the viability of these cells to prevent neurological disease. More research is needed, but this is a promising result for this group of diseases.

While new research is needed, a lot of studies were conducted in the 1980s to determine the antibacterial potential of CBC. In a study by Turner and Elsohly, CBC was shown to have powerful antibacterial properties in fighting both gram-negative and gram-positive bacteria like E. coli and staph.

A more recent study in Europe shows that CBC and other cannabinoids can be effective against MRSA. This is on par with current antibiotics, but CBC is likely to produce fewer side effects than a strong antibiotic could.

The effects of CBD for dry skin and acne-prone skin have been researched with positive results, leading researchers to test the efficacy of CBC and other cannabinoids. The results showed that CBG and CBGV have potential for treating dry skin, while CBC and THCV show potential as anti-acne agents. In addition, all cannabinoids could be effective at addressing skin problems due to their anti-inflammatory effects.

Cannabis can be effective at lifting the mood and alleviating the feelings of depression, particularly because of the euphoric effects of THC. Depression can be a side effect of high levels of THC, however, so researchers considered the antidepressant potential of other cannabinoids on animal subjects. Both CBC and CBD produce significant anti-depressant effects, and CBC combined with THC has positive results.

Like many other compounds in cannabis, the legality of CBC is a bit murky.

CBC is a compound of Cannabis.  CBC can be derived from hemp with a lower concentration of THC than 0.3 percent, which puts it in a sort of legal loophole.

At OilWell CBD, all of our cannabinoid products are naturally produced, hemp-derived, and compliant.

Several strains produce high levels of CBC, but many farmers and producers breed their plants to have either high THC or high CBD levels. Because of this, plants with significant CBC content can be rare.

At this time, there are no traditionally associated and publically recognized breeds of Cannabis bred specifically for high CBC concentrations. Without the demand for this lesser-known cannabinoid and the lower supply, it can be difficult to find products with a high concentration of CBC, but not impossible.

What’s the Difference Between CBC and CBD?

Cannabinoids have the same formula C21H30O2, but the atoms within the molecule are arranged differently. These slight differences are what contribute to the different actions of different cannabinoids, such as THC producing euphoria.

THC binds with CB1 receptors, producing an intoxicating effect. Like CBD, CBC doesn’t bind to CB1 or CB2 receptors. Instead, it interacts with other receptors to enhance the endocannabinoids in the body, such as anandamide.

In addition, the action is more about interfering with the natural processes that impact the receptors, rather than binding with them. The action is indirect, while THC acts directly on receptors.

Just like CBD, CBC is a relatively safe cannabinoid that’s completely non-euphoric, meaning it’s less likely to produce side effects. The few reported side effects include nausea, dizziness, and fatigue, though these typically occur at high dosages.

Still, it’s not widely used like CBD and doesn’t have a definitive dosage, so it’s best to start slow and monitor any potential adverse effects before increasing the dosage.

The Future of CBC

Most research into cannabinoids as potential alternative treatments for health conditions focused on CBD and THC. Now that we have a solid understanding of these compounds and their potential benefits, the focus is shifting to minor cannabinoids like CBC.

So far, the results for CBC have been promising for many ailments, including neurodegenerative diseases, acne, depression, pain relief, and more. As research continues and reveals greater benefits, we may see an increase in the production of CBC products.

CBC is one of the most prominent cannabinoids in cannabis and has been discovered since the 1960s, but it’s not as well known as THC and CBD. More research into the lesser cannabinoids, like CBC, has been showing benefits beyond that of THC and CBD for specific ailments and therapeutic uses.

CBC has a unique mechanism in the way it interacts with the endocannabinoid system, which may be the key to its medicinal potential. If you’re searching for CBC products, OilWell Cannabis offers a wide range of hemp-derived cannabis products. Contact us to learn more! 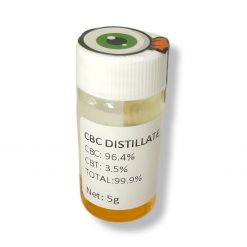